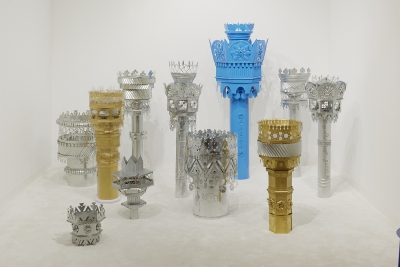 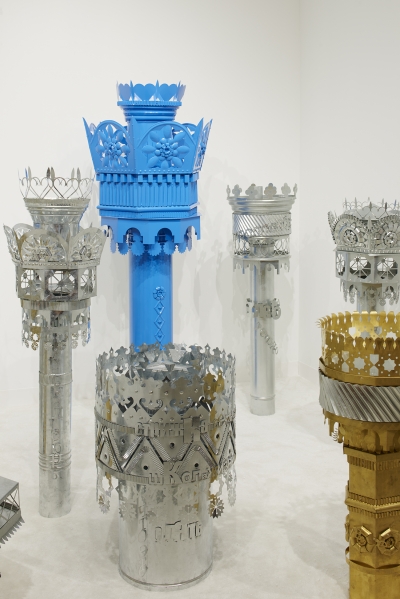 Harry Nuriev, founder of Crosby Studios, has teamed up with Russian tinsmiths and artisanal metalworkers to create an edition of objects deeply rooted in provincial craft and folk architecture traditions. Revisiting his upbringing in the countryside of the Russian Caucasus, Nuriev presents a collection of furniture that revives these craft traditions, repurposing and giving them new life by recontextualizing their utility.

Returning to his time spent in the rural Russian landscape, Nuriev’s installation and furniture collection is inspired by the izba, a traditional log house found on Russian farmsteads. Early Russian vernacular architecture and craft relied on the dominant building material of the time: wood. For centuries, Russian material culture concentrated on the embellishment and ornamentation of wood in order to make it look more expensive and unique, as can be seen in the latticework on the facade of a traditional izba. When tin-coated iron became more widely accessible and incorporated into building materials in the late eighteenth and early nineteenth centuries, the izba began to see eccentric embellishments of smokestacks and rain gutter waterspouts, with the one-of-akind downpipes and chimneys often creating friendly competition among neighbors. The prewar tradition has disappeared due to mass production, with very few master tinsmiths remaining to keep the craft heritage alive.

Nuriev has traveled halfway across Russia to work with a master tinsmith in order to create a series of fl oor lamps based on the forms and ornamentation of these traditional downpipes. The lamps encompass and illuminate an extravagant armoire based on the formal intricacy of tin-coated smokestacks. The installation is atmospherically unifi ed through the decorative use of latticework to create an architectural ribcage.